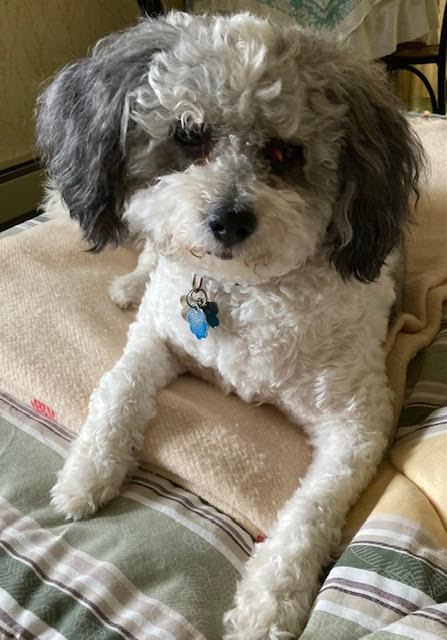 I’d been searching for a dog for several months, striking out with shelters located in Lower Michigan when their local applicants got ahead of me as potential adopters.  So many people were hoping to find a match to help them fill lonely hours created by Covid!

It was early April 2021, and I decided to wait for fairer weather to resume my search.  Then a friend called me about a post she’d seen from UPAWS near Marquette and thought it might be a dog I’d be interested in checking out.

I admit the prospect of driving north to see this dog wasn’t encouraging when I read the description of an older dog who needed guidance in learning to behave himself.  But I went anyhow on a chilly wintery-spring morning.

It was less than encouraging to be instructed to wait outside while a staff person went back in to retrieve him.  Covid had made even “dog rescue” an arms-length deal!

And, when she brought him outside, the gray and white furry dog seemed bonded to her and it was difficult to get his attention.  In fact, when she went back inside to get paperwork about him, he whined at the door wanting to go back with her.  Not encouraging at all!

She returned with very little detail from his most recent owners — they’d basically dropped him off and failed to complete the background paperwork.  The only clear message was not encouraging:  he’d apparently bitten an EMT who was tending to his owner and had nipped at his owner during a bath.  Was that a dog I’d want?

I gave it a lot of thought as I walked him around the shelter complex.  He was still eager to go inside when we returned to the front door — which wasn’t something I was allowed to do.  There had been no warmth or interest in me as a potential adopter on his part.

But, I decided I’d try taking Tiger home with me in a few days, after he was neutered and paperwork completed.  I borrowed a kennel and returned days later to pick him up.  The ride home to Escanaba was filled with plenty of barks and lots of whining, as well as new apprehensions on my part.
It meant making adjustments for both of us:  he avoided the kennel at all costs but seemed to know when he had to go out;  the shelter had sent along a bed for him but it paled when nightfall arrived and my own bed looked more comfortable; his “cone of shame” that protected his new incision was a constant obstacle, and “What to feed him?”

With time, I learned his personality and quirks. We went through training and he showed signs that he’d been through the routine before, responding quickly to the trainer’s lessons.  Still, he retained his personality as a one-person match and favored quiet trails and secluded beaches for our regular walks.

One year later, Tiger and I still have much to learn about each other and we learn every day.  His presence has made me more flexible and he has proven to be a loyal and loving partner.

In fact, 6 months after I adopted him, he played a very important part in saving me.  On Oct. 24, I was driving him to a favorite walking locale…well away from home…when I suffered a major stroke.  When my car ran off the road, a passing motorist called the ambulance that got me to the ER.  Exiting the car in the confusion, Tiger was roaming on his own for several hours but was found and sent to the Delta County Animal Shelter.  We both survived, were reunited in days and continued our journey of mutual love.

His presence in my life and his need for less-busy walking locales had taken me out of the house that day. Thankfully, had I been at home alone with him, I probably wouldn’t have known or been able to call an ambulance.
Problems or challenges? I consider Tiger my blessing!

Happy Birthday to Tiger, the 2021 April Dog of the Month.