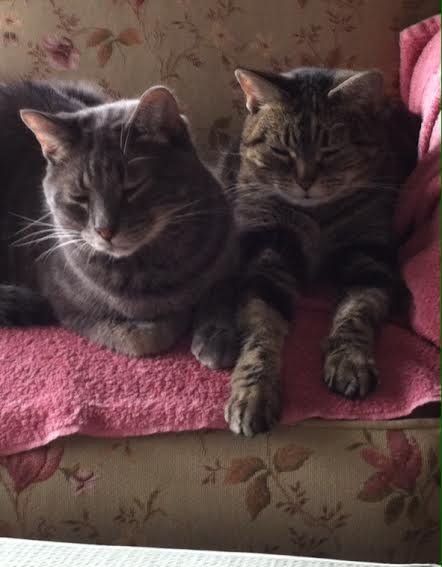 For a long time I’ve meant to write and tell you about Smoky’s adjustment to condo life. I adopted him on Nov. 17, 2013. We were told he was a boy, but in the following weeks we learned he was not a little boy but a little girl. In spite of that we kept “his/her” name as Smokey.

Smokey was slow adjusting to her new home, new people and the resident 13 year old cat. Fortunately we had the space to accommodate her adjustment needs. She had her own “bedroom” with cozy spots, a litter box and food. Gradually, she started venturing out of the room to other bedrooms and bathrooms; however, she would not come into the general living area. At the end of four months, she came out of her room, stopped at the utility room door as usual, then walked the perimeter of the living and dining rooms and kitchen. She’s been comfortable in all rooms since then. In another one to two months, she and my other cat, Allie, started to snuggle and spoon. Fortunately, I had read an article in the UPAWS flyer which said that it may take up to six months for a cat to acclimate to a new home. We let her adjust at her own pace but “visited” her in her own home for at least an hour a day. I did train her with treats to be close to me.

Smokey is the aptly named “Scardy Cat,” the reason the name was coined. She still startles with loud noises and the arrival of visitors. Some children call her the “running cat.” But now she usually just runs a few feet away and doesn’t hide for several hours.

As time passed she relaxed when getting attention and now does want attention but she’s just not sure what kind of attention she wants. I can now pet her for a few seconds, especially on her cheeks and chin. She likes playing with string toys. We continue to see progress in her behavior almost daily.

While it’s taken a long time for Smokey to become as comfortable as she is now, it’s been worth it. She’s a real treasure and I wouldn’t trade her for anything!