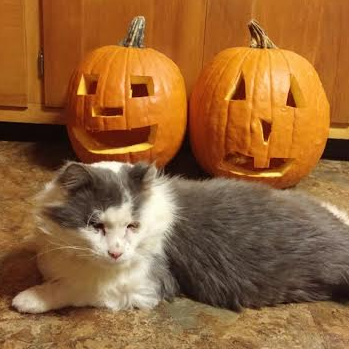 I wanted to give you an update on Petey that we adopted back in August.  Some people may remember the story of Petey, the blind kitty that was found on the side of the road.  My husband and I fostered him for a week and had to adopt him 😉  We weren’t sure how he was going to do and were a little worried because we had other animals and was wondering how everyone would get along.
Well, I’m happy to report that he is doing wonderful!  He has come so far, in so many ways.  He now knows his way around the whole house, and very rarely will bump into things. Petey no longer eats so fast that he makes himself sick.  He now knows that there will be food for him everyday and he has learned to take his time eating. Most importantly, Petey is happy and trusts us.  When he first came home with us, he wouldn’t seek out attention or look to be pet at all.  It took many weeks, and slowly but surely he came around to the idea.  Now, 4 months later, he will come every night and sit on my lap for as long as his heart desires.  Petey within the last month has let me pick him up and hold him without getting scared.  I could go on and on about how great he has been doing. Petey is excellent with our other animals and loves his sister, Cami (was known as Pudding) that we had adopted from the shelter a couple weeks before Petey. I have attached a couple pictures of Petey, looking very handsome.  He is truly an amazing kitty, and we absolutely LOVE him!