UPAWS Paws Park is been named in honor of Mary Jo Reichenberger.  Mary Jo is the mother and mother-in-law of Mark and Christine Troudt.

Mary Jo has been a major factor in their love of and support for homeless pets.  She has had shelter dogs most of her adult life and has also supported the animal shelter in Oshkosh Wisconsin where she is still living with her rescue dog Jasper.  She is a Certified Animal Behaviorist and has worked with dog issues as a business and to help shelter dogs become more adoptable.  She was also instrumental in the founding of the Best Friends Dog Park in Oshkosh in 1995. 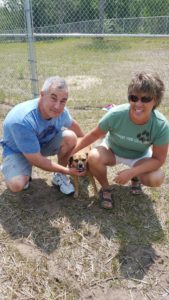 also a passionate dog lover.  For almost 20 years, Ralph would greet his grand-dogs Shelby and Fester as they dropped them off before work for doggie daycare.  He loved spending the day with the dogs providing ample snacks and a daily afternoon nap on the couch under a pile of dogs.  Ralph passed away in 2013.

At the Grand Opening Celebration, Mark and Chris stated “We are proud to see the wonderful Paws Park named in honor of Mary Jo. We look forward to seeing many dogs including our UPAWS alumni Margie and their humans enjoying the facility for many years.”