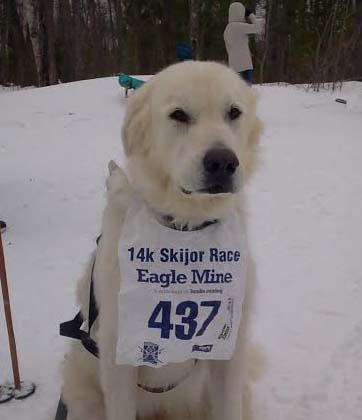 Last Sunday Monty competed in the Noque skijor race. After fostering /adopting Monty last spring we took a trip to Appleton to have his knee repaired. He had a successful TPLO surgery and rehab. For the past seven months Monty has not missed a daily walk and all the hard work paid off!

We were not the fastest but he was absolutely the crowd favorite. After “watering” at least thirty trees and stopping for hotdogs, Monty finished and won the Red Lantern Award(last place).

While walking Monty this summer, a man working on the gas lines on my street approach us. He asked if Monty was a Great Pyrenees and I told him he was. He told me a couple years back he was working on gas rigs in Montana and rescued a Pyrenees that looked just like him.  I told him he came from Montana and his name was Monty. It was a happy reunion!

The man said Monty was wondering the plains and would following the rigs as they moved them. Monty was extremely malnourished and underweight so they began feeding him. The man was planning on traveling home to the U P and knew the weather out west was supposed to be -30.

Sir, thank you for saving him.