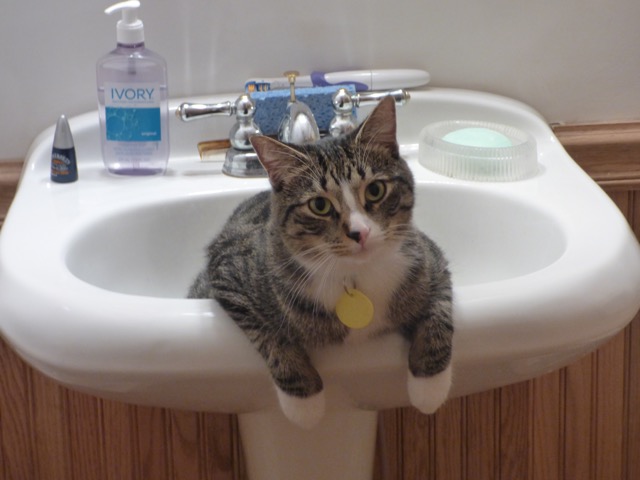 Well we are home in Grand Rapids now. We adopted the male cat with the funny name that I can’t remember. When we left to return back to AuTrain we thought we had made a grave mistake. He thought he was in serious danger and howled for miles. I told him to stop barking but he ignored me, but we never had a cat before. He seemed to adapt to the place in AuTrain pretty well as long as we let him do what he wanted ( crawling on all surfaces no mater how high, spreading his liter all over, tipping over his water, and insisting on curling up in my bathroom sink after I finish shaving ).

On the way back to GR. He was fairly content with no stops for him  in our 6hr. drive with a minimum amount of barking. Now he has complete control of our house. He has explored every millimeter in his vicinity and has caused
numerous hours of frantic searching fearing he had gotten outside and lost. I went out and walked like a mad man calling , Louis,Louis….” ( His new name ) until people on the road were looking strangely at me. After a few hours I was standing in the kitchen and all of a sudden he came sauntering out as if I were nuts. Carole was away and  I was spending a great amount of time wondering how to break the news to her about the funny named cat we got at UPAWS.
We continue to be constantly amused by Louis and try to satisfy every wish King Louis would desire.
Thank You so much for the great experience adopting Louis.
Best Wishes,
Chuck and Carole