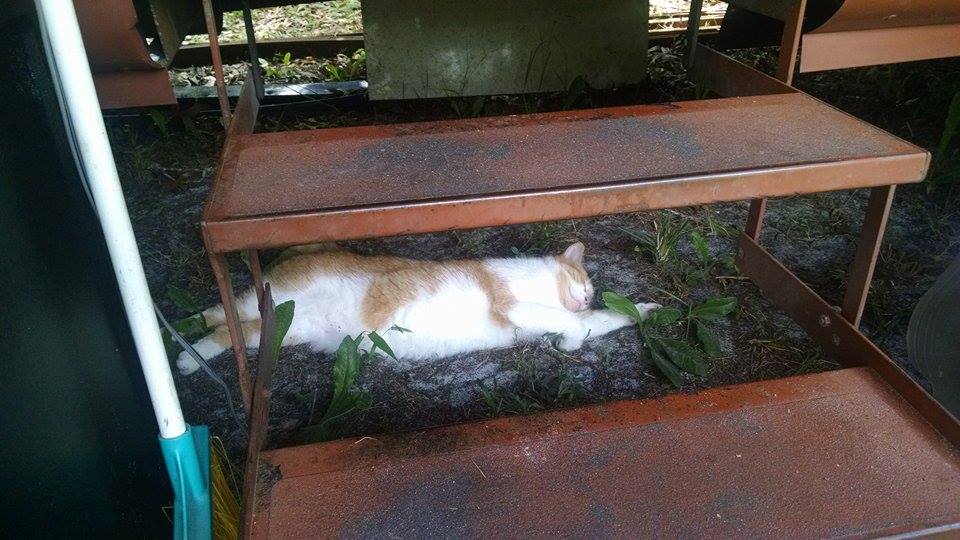 I want to tell you the story about a kitty we adopted from upaws. His name is Julio (orange and white).Todd and I adopted him in June of 2014. When we walked into Upaws and Julio stood right up and started meowing really loud at Todd. So we went to his cage and Todd touched him and Julio immediately rolled on his back for Todd to pet his belly. He seemed like a happy kitty. So, we took him home. He liked his new home. Then we had to take him in to get his shot and he was not happy with us at all. But as soon as we got back home he was all happy again. We just love him. After some time, we noticed him getting a little moody, depressed, and lazy. Not sure, but probably was the same reason a lot of people get depressed, the snow! So, about a month ago we uprooted to Florida. On the ride down in the motorhome, Julio did a lot of loud meowing at first, but settled quickly by Todd’s side. This cat just loves Todd. Once, we settled a little, we made the choice to let him explore the outdoors. I was so scared of him running off. He was scared of his own shadow first couple times but then quickly adapted to the outdoor life here in Florida. I have never seen such a happy kitty. He loves this life. He doesn’t leave the yard and follows Todd wherever he goes. He greets every guest by their vehicle. We are so happy we came to upaws that day and adopted Julio, he loves us just as much as we love him. I also have a 15 yr old terrier/pekingese mix, they are buddies! Just wanted you to hear our happy story. You are welcome to share on your wall.