NEGAUNEE, Mich. (WLUC) – At its sold-out annual fundraising gala, the Upper Peninsula Animal Welfare Shelter announced the public kick-off for the Imagine the PAWSibilites: Campaign for an Animal Community Center. The kick-off included a $100,000 challenge match from the Troudt Fund at the Community Foundation of Marquette County. From October 22 through December 31 every dollar given to the capital campaign would be matched. 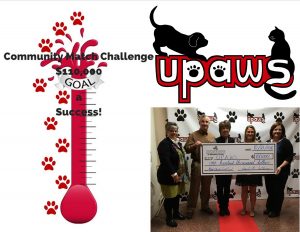 UPAWS reached $100,000 in gifts on December 29th; at that time Mark and Christine Troudt pledged another $10,000 to match any gift received or postmarked before the end of the year. At the completion of the challenge, UPAWS is excited to announce that approximately $120,000 was given in honor of the Troudt Challenge and will now receive the full $110,000 challenge gift. These gifts came from over 250 individual donors, businesses, and foundations. The board, staff, and volunteers of UPAWS are honored to have such amazing support from the community.

Now that the Imagine the PAWSibilities Campaign to raise $3.7 million is underway, with the support of the Troudt Fund and the community, approximately $2.05 million, or 55 percent of the goal, has been raised. However, UPAWS still has a long way to go. Construction will depend on reaching 80 percent of the fundraising goal, with an expected groundbreaking in 2017.

The current UPAWS facility was built in 1978 and expanded in 1988. Animal intake and services at UPAWS has grown dramatically since its inception 40 years ago, but not the shelter space. Today, nearly 1,500 animals come through UPAWS open-admission, no kill shelter each year. The shelter is a busy place providing animals and pet owners with critical pet services. UPAWS performs the crucial role of finding homes for homeless animals, as well as reuniting lost pets with their families, and is a leader in the no-kill movement by consistently reaching an award-winning 98 percent save rate.

Caring staff and volunteers at UPAWS have succeeded in making the best effort to run the shelter effectively and efficiently, but the building still lacks in meeting the basic needs for both animals and the community. The Animal Community Center will provide better comfort and care for our animal companions, as well as community space and expanded services.

As animal shelters are held to higher standards, as well as serving more diverse needs, it takes a cooperative spirit to fulfill the goal of a new facility that serves our animal companion needs and the community as a whole. To learn more about UPAWS dream for an animal community center, or to make a donation, visit www.upaws.org, email campaign@upaws.org, or call (906) 475-6661 to schedule a meeting.