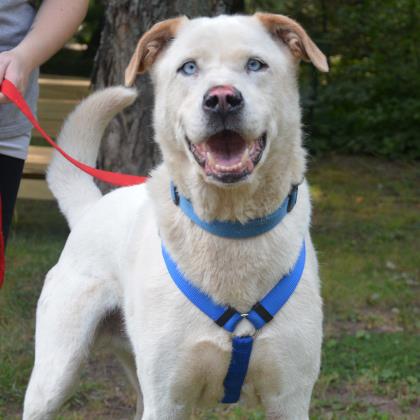 He absolutey loves it. We form a bond that is unbreakable. He follows me everywhere i go and he is one spoiled and picky dog. I have learned what he likes and what he doesnt like. He won’t eat dry food plain ever and I add wet food into it with his senior vitamins and coat and skin powder to put him in great shape. He is  adventuress and I bring him everywhere I go. He loves other dogs and playing with them, before they said he didn’t like that. Also he loves car rides before they said he was only in a car once. He has never had an accident in the house which is great. He tells me when he needs to go outside and everything. He has a favorite couch where he lies on and he has a bunchhhhh of toys that he loves to cuddle up with and play. He became very attached to me. I was gone for a weekend and my roomates watched him and they said he became very anxious and refused to eat just because I was gone and he missed me a lot. I came back home and he was jumping with joy. He is my bestfriend and I love him with all my heart.